Mask Up! Building Personal and Collective Resilience Through Prāṇāyāma and Masks

Patañjali yoga sutra II.50: As the movement patterns of each breath - inhalation, exhalation, lull - are observed as to duration, number, and area of focus, breath becomes spacious and subtle. 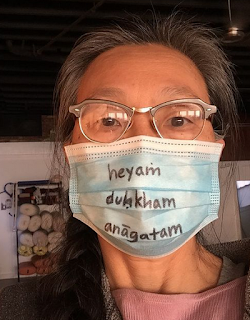 The COVID19 pandemic has been a fascinating opportunity to study the breath, immunity, and the nervous system, for Iyengar Yoga practitioners like me.

Today in class, we explored the idea of breathing through and with resistance. From a yogic, and general health, point of view, the nose is the perfect instrument for breathing. The narrow passageways, the mucus membranes, and the hair of the nostrils serve as filtration, cleaning the air as we inhale. The nose creates a small amount of respiratory resistance, toning the diaphragm and stimulating the phrenic and vagus nerves as we inhale and exhale. Nitric oxide accumulates in the sinuses, which plays an anti-viral role.

Mouth breathing, on the other hand, allows us to gulp large amounts of air, with little to no resistance, for instance after a sprint, when we may need instant oxygenation. However, during more typical day-to-day activities, mouth breathing can be very damaging, ranging from mild discomfort like cotton mouth and chapped lips, to hyperventilation, anxiety, asthma symptoms, sleep apnea, and more.

In today’s class, we added another layer of resistance through twists, creating an uddiyana kriya-like situation, deliberately restricting the movement of the diaphragm. We noticed how the abdominal twists prevented the diaphragm from fully descending to let air into the lungs. Instead of fighting the restriction, we practiced breathing into the resistance, and the whole circumference of the waist in this position of confinement. We also observed how the breath could be re-directed into the spaciousness of the chest, while using auxiliary respiratory muscles such as the intercostal muscles, and how even the arms could assist, by externally rotating to spread the collarbones, descend the trapezius, and engage the shoulder blades into the back ribs to assist the actions of the intercostals.

We explored this further in supine Ujjāyī, Viloma, and in seated Ujjāyī with prāṇāyāma mudra. We finished with a prone Śavāsana, with a narrow folded blanket under the navel, observing the breath in the back body with a mild restriction in the front body.

As always, Iyengar Yoga invites us to observe what these practices bring up in us physically, physiologically, mentally, and emotionally. The breath is one of the most obvious and powerful tools we have for self-observation, developing sensitivity and understanding, and eventually, transformation and healing. We undergo immediate changes in breath, heart rate, and body temperature when we experience stress of any sort, and we can bring immediate change to our state by consciously altering the breath.

Today’s breathwork in particular created the opportunity to build carbon dioxide tolerance. When we’re stressed, we easily fall into a cycle of overbreathing, disrupting the balance of O2 (ideally 94-96%) and CO2 (4-6%). If we have low CO2 tolerance, we feel we must breathe more, thus exacerbating the stress, and perpetuating the cycle. However, we disrupt the cycle when we build up our CO2 tolerance, which allows us to stay calm even in the face of stress, and keep our breathing at a normal level. In other words, CO2 tolerance teaches emotional resilience.

This is where masks come in. Most of us have an understandable natural resistance to masking up. It’s uncomfortable. It’s binding. It’s clammy. It pulls on our ears and our hair. We feel we can’t breathe. Some feel the economic impact of quarantine outweighs health hazards, and even the ensuing loss of life, so masking represents a huge sociopolitical and cultural divide.

Strong emotions may arise in some who refuse to mask: feelings of constriction, suppression, suffocation that bring up the urge to fight back. No one wants to be told what to do, especially folks who are not used to having restrictions. In our society, that tends to be the people on the highest end of the social hierarchy who have the most freedom: white folks.

As a person of color, an immigrant, and a woman, I’ve understood from day 1, without even being told, that I had to mediate my behavior, and that I could not bring my full self to every situation, and I always had to have my guard up. I’ve also been a frequent traveler to India and South Korea, where masking is part of the culture, mostly due to issues of air pollution, but also as an act of social responsibility to prevent the spread of illnesses.

What I now understand through the yogic physiology lens, is that masking can raise our carbon dioxide level in our bloodstream, and unless one trains oneself to tolerate such levels, we may experience discomfort, air hunger, and a feeling of gasping. Do you remember that old school cure for anxiety and stage fright? You were supposed to breathe into a brown paper bag until your breath settled down. When we panic, we tend to hyperventilate: too much oxygen. Restricted breathing, into the paper bag, still permeable (like a cloth mask), helps balance the O2 with CO2, tones the diaphragm, and awakens the parasympathetic nervous system, which signals us to calm down and slow down.

We have to train ourselves to breathe softly, steadily, and evenly through our noses as we mask. Most of us habitually overbreathe. We increase lung capacity not by gulping huge amounts of oxygen, but by mediating the breath, as yogis teach, through nasal breathing with soft inhales, exhales, and periods of retention (breath holding). Prāṇāyāma involves conscious mitigation of the breath so that we build up our CO2 tolerance, and balance our sympathetic and parasympathetic nervous systems to create a calm and alert state.

All of us need to stay calm while protecting ourselves and others through masking and distancing. Can we shift our perception of the mask from an object of restriction into an object of liberation? If we experience strain in it, can we understand that strain as a signal to shift the way we breathe? To apply prāṇāyāmic principles and practice softer, more subtle bāhyābhyantara stambha (exhales, inhales, and stoppages)? We can make mask-wearing a practice for  healing and transformation for ourselves and others.